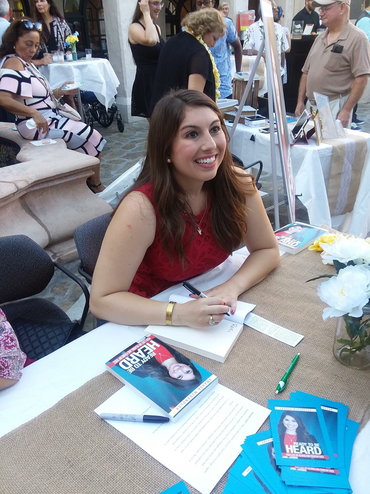 Amanda McDonough was born in 1990 and diagnosed with hearing loss at the age of 4. As she grew older, her hearing steadily declined as she battled to hide her ongoing hearing loss from her family, friends, teachers, and the world. Despite facing unbelievable challenges, she succeeded in; getting straight A’s in school, having a successful child acting career, and leading a fairly “normal” life. But one day, during the most difficult part of her college career, she awoke to discover that her remaining hearing was completely gone. She had lost 100% of her hearing in both ears. All of a sudden, she was unable to communicate with the people around her. She did not know sign language, could no longer speak well, and could not lip read. She became isolated from the world and had to finally face her hearing loss, accept that she was deaf, and find a way to finish college without being able to hear. She found the strength to teach herself to talk well again, to lip-read, and to use sign language and set out on an emotional rollercoaster ride to discover who she was and who she wanted to become. As a late deafened adult Amanda pursued higher education at California Polytechnic University, Pomona where she received her Bachelor’s of Science Degree in Business Administration- International Business and Marketing Management, with an emphasis in Entertainment Marketing.
McDonough currently resides in Los Angeles, California and enjoys successful inspirational speaking and acting careers. Amanda’s recent television, theater and film credits include: ABC's "Speechless," NBC’s “Bad Judge,” ABC Family’s “Switched at Birth,” Chris Lilly’s Pilot series “Just Us Guys,” "Our Town" with Tony nominated Deaf West Theater and films such as “Listen” directed by Michaela Higgins and "Silent Star" directed by Steven Sanders.. Her films "Passengers," "Loud and Clear, " and "Lady Electric" have gone on to show in various festivals  (such as Cannes) and win awards.  Amanda's life story has even been the subject of documentaries such as USC's "Amanda" and radio broadcast stories such as KCRW's "Silence."" She has also been interviewed about her life and upcoming book by NBC News and Fox News, as well as for dozens of online articles and blogs.
The author has a popular YouTube channel and has partnered with organizations such as Accessibility Media, Pomona Proud, and more to create videos that share Deaf content and information with the public.
Amanda has spoken about her own hearing loss story, and how you can overcome your own personal obstacles, to various schools and organizations. Her blend of English and American Sign Language keeps her audience’s visual and auditory senses engaged.
She currently resides in Los Angeles County and spends her free time volunteering, creating information videos for the Deaf and Hard of Hearing, and advocating for disability rights. ​
Copyright © 2016